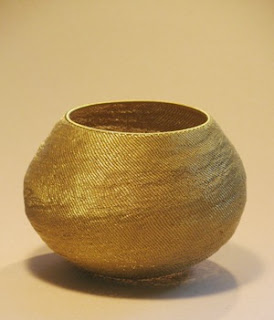 Exhibition: Threads from
Dates: 3 February – 31 March 2011
Opening times: Mon – Sat 9h30-17h00
Place: Gold of Africa Barbier , ()
Entrance fee: R30
Webpage:  www.threadsofafrica.com
About the exhibition:
We invite you to view our first collection of bowls and bangles woven by talented weavers from the Thukela (Tugela) Valley in fine 18-carat gold, silver, copper, brass and shakudo wire.
A man in had a dream. He dreamt of a golden bowl. A little bowl, hand-woven. He owned a copper wire bowl woven in the Thukela Valley, KwaZulu-Natal, and his engineering background and interest in metals set him thinking about strands of gold. Who were the weavers? Where did they obtain their wire?
There are difficulties in weaving with 18-carat gold wire, and the first little bowl was an experiment. It began in 2002, when Julia Meintjes was assembling an art collection for a Sydney-based company, RFC Corporate Finance, which offers investment and corporate advice in the resources, energy and industrial sectors. The company has clients in the South African mining industry, and when the MD, Rob Adamson, saw a woven copper bowl by an artist from Mdukatshani in the Thukela (Tugela) Valley, he asked whether a similar bowl could be made in gold wire. The commission was given to Mzonzima Dladla, and because of technical, creative and logistical challenges, it was more than two years before that first little gold bowl was completed.
Other bowls would follow, some in 18-carat gold, some combining gold with various coppers, silver, brass and shakudo. In 2008 the commissioned a special edition of six bowls, which were presented to a select group of their donors - and the project was formally named Threads of Africa. 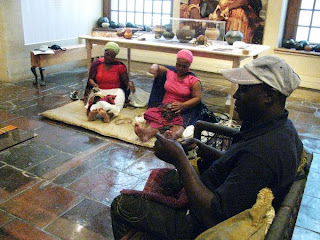 Nobody knows when the first gold wire was hammered into strips on the South African veld. A thousand years ago? In 1933 the first evidence of handmade gold wire was unearthed in graves at Mapungubwe, a rocky hilltop near the .
Now a world Heritage Site, Mapungubwe would yield spectacular finds of gold artefacts, including gold beans, gold foil, and the famous gold rhino. Gold wire anklets and bangles, however, were the most important from a technological point of view. The wire appears to have been hammered out by hand and then smoothed off with sand or stone, before being wound into a helix.
Who were the goldsmiths, and where did they find the gold? The answers have been elusive. Mapungubwe was briefly occupied between 1220 AD and 1290 AD, a period that was part of the Late Iron Age, when African metalsmiths were already skilled at the art of extracting metal from rock. They had little interest in gold, however. It was too soft for utility, and it had no song. It was copper and iron they were after. They needed iron for weapons and hoes, and copper was used for decoration. Copper was the “red gold” of Africa, the prestige metal, offered to the gods, and buried in the graves of .
Early metallurgists worked with fire and, a thousand years before Mapungubwe was settled, forgotten men had been testing their minds on how to set fire to draw molten iron from rock. You can pick up the slag of their furnaces today. It lies on the surface of our modern landscapes, the scattered debris of ancient fires that mark the radical changes of the Early Iron Age. It was an age of innovation and settlement. By 300 AD a new way of life had spread from the Limpopo south into , and the well-wooded valleys of the . Almost every village had a smelting site, and there were shallow pits where village potters used fire to bake earthenware pots incised with pretty decorations.
There are still potters at work in Thukela valley today, digging into ant heaps to scrape shallow pits which are used as simple kilns for firing. The pots are made to order, or sold along the road on pension days – a local trade based on the need to use clay pots for beer in any ritual involving the amadlozi, or family spirits. Some of these potters supply the clay bowls which are used as moulds by the weavers of the Threads of Africa project.
Although wirework has been described as a ‘quintessentially Central and South African craft’ practiced by different tribal people over hundreds of years, there is no evidence of gold wire baskets or bowls in ’s archeological record.
© Text and image: www.threadsofafrica.com