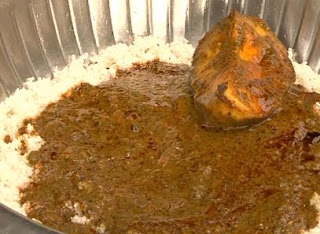 Dried fish on manioc leaf sauce, a recipe in Baynunk language of Senegal

Baynunk is an Atlantic language spoken in southern , northern , and the neighboring  . It belongs to the Nyun-Buy group (according to Ethnologue) – along with Buy, language of the Cobiana ethnic group – of the Niger-Congo language family.


The origins of the Baynunk people are still rather uncertain. But the Baynunk themselves claim to be the most ancient peoples of Casamance: the ancestors are said to have come from the East, chased away by the Malinke and forced to end up settling in Casamance. The Malinke call them Abaynunko (“those who were chased away and seek shelter”). The term Abaynunko decomposes as follows: abay (“he who has been chased away”) and nunko (“he who seeks shelter”).

Ingredients:
How to cook it:
Recipe by Awa Sambou.
Watch the video to know about the recipe!
This is a recipe from , told by Awa Sambou in Baynunk language, spoken in the region of Casamance.
The fish is dried, the sauce is made from manioc, and the dish itself is served on thinly ground, local Niamone rice.
Awa Sambou is the one teasing our taste buds here. On beautiful footage by Muriel Lutz, she introduces the ingredients and utensils, and unveils her cooking secrets, in Baynunk language from Casamance.