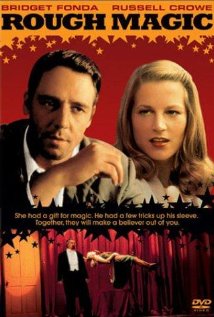 Set in the 1950s, Rough Magic tells the story of what happens when a pretty apprentice magician goes to to escape her fiancé, a wealthy politician, and to find a Mayan shaman who will teach her ancient principles of magic. She is being trailed by a detective hired by her fiancé. He's a former photojournalist traumatized by what he saw in . The photojournalist joins her in the search for the Mayan shaman, and falls in love with her; the feeling is not reciprocated. When she finds the shaman, she drinks a potion which empowers her to do magic. The potion has life-changing effects on her and her relationship with her companion. They have strange experiences which are brought about by magic.

© Text and image: Wikipedia and IMDB

Although set in the maya region of Mexico, the movie shows some footage filmed in the lava fields of PARICUTIN volcano in Michoacán State. You can read more about this volcano on this blog entry [in spanish].
Enviar por correo electrónicoEscribe un blogCompartir con TwitterCompartir con FacebookCompartir en Pinterest
Etiquetas: English, Mexico, North America, TV & Cinema