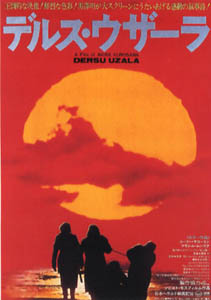 The film is based on the 1923 memoir Dersu Uzala by Russian explorer Vladimir Arsenyev, about his exploration of the Sikhote-Alin region of over the course of multiple expeditions in the early 20th century.
The film is almost entirely shot outdoors in the ruggedly beautiful Siberian wilderness. As with most of Kurosawa's work, each frame is carefully composed to form a dramatic picture. The film explores the theme of a native of the forests who is fully integrated into his environment, leading a style of life that will inevitably be destroyed by the advance of civilization. It is also about the growth of respect and deep friendship between two men of profoundly different backgrounds, and about the difficulty of coping with the loss of strength and ability that comes with old age.
The film opens to a forest that is being cleared for development, and Arsenyev searching for an unmarked grave. The film then flashes back to Arsenyev's surveying expedition to the region in 1902, before the village was built. A topographic expedition troop, led by Captain Arsenyev (Yuri Solomin), encounters a nomadic, aboriginal Nanai tribesman named Dersu Uzala (Maxim Munzuk) who agrees to guide them through the harsh frontier. Initially viewed as an uneducated, eccentric old man, Dersu earns the respect of the soldiers through his great intelligence, accurate instincts, keen powers of observation, and deep compassion. He repairs an abandoned hut and leaves provisions in a birch container so that a future traveler would survive in the wilderness. He deduces the identities and situations of people by analyzing tracks and articles left behind.
Dersu Uzala saves the lives of Captain Arsenyev and one of his men not once, but twice. First, when a sudden blizzard overtakes Dersu and the Captain, Dersu shows Arsenyev how to quickly build a straw hut for shelter using tundra grass. The two men avoid freezing to death and are discovered by the rest of their comrades when the blizzard clears. Five years later in 1907, Dersu and Captain Arsenyev again find each other in the wilderness. When Dersu and Arsenyev fall into swift moving currents while crossing a river in a raft, Dersu forces Arsenyev to swim while the raft is close to shore then directs the party to cut a tree which can reach him before he drowns.
At the end of the expedition, he leaves the soldiers by the railroad tracks and returns to wilderness, only to encounter Arsenyev again, years later, on another surveying expedition. However, Dersu's eyesight and other senses begin to fade with age. Dersu is no longer able to hunt, and the Siberian tiger stalking the old man comes very close until Dersu shoots at the predator. Captain Arsenyev decides to take Dersu with him to the city of . Dersu quickly discovers that he is not permitted to chop wood or to build a hut and fireplace in the city park, nor is he allowed to shoot within the city limits. The constables often bring Dersu back to the house, and one day he asks to leave the city and return to living in the hills. As a parting gift, Arsenyev gives him a new rifle.
Some while later, Arsenyev receives a telegram informing him that the body of a Goldi has been found, with no identification on him save Arsenyev's calling card, and is requested to come identify the body. Arsenyev finds that it is indeed Dersu. The officer who found Dersu speculates that someone may have killed Dersu to obtain the new rifle that Arsenyev gave him.
Dersu Uzala won the 1975 Oscar for Best Foreign Language Film.