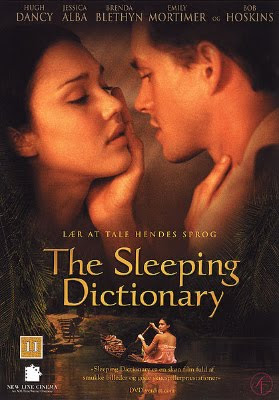 Title: The Sleeping Dictionary
Director: Guy Jenkin
Writer: Guy Jenkin
Year: 2003
Running time: 109 minutes
Plot summary:
A young and naive Englishman, John Truscott (Hugh Dancy), goes to the British colony of Sarawak, to try and apply his father's work to the Iban society. He tries to civilize them, building schools and providing education for the Iban people. He is met with unfamiliar local customs. Selima (Jessica Alba) becomes his "sleeping dictionary," who sleeps with him and teaches him the language and the habits of the locals. Despite their intents, the two find themselves falling into a forbidden love. John is eager to marry Selima despite the longhouse not allowing it. When John tells Henry about his plans to marry her, they lock Selima up. Selima then agrees to marry in the longhouse and they part ways.
A year later, John is seen marrying Cecilia. He still struggles to get over his past with his sleeping dictionary. With Cecilia, he decides the best thing to do is go back to to continue his work over there. Returning to , Cecilia notices John's desire for Selima with his constant distance from her. Cecilia demands to know more about Selima and John replies by saying that she's married to Belansai and that the couple have a baby together.
While at the lake collecting rocks for research, John sees Selima with a baby. He believes the child to be his and asks Famous to arrange a meeting with the pair. Soon back at the house, Selima walks in unaware that John is there. John begs to see his son and soon Selima walks away not before John can stop them. Here, John meets his son Manda for the first time. When Belansai hears news that John is spending time with his wife, he sneaks in to try to kill John but only manages to hurt him with a razor. The next morning, Henry reveals his past to John about his own 'sleeping dictionary', which resulted in the birth of another child: Selima. When Belansai is caught for trying to kill an officer, he is sentenced to be hanged. Selima is not happy with the fact that Belansai will be killed as he's been a good father to Manda. Not wanting to kill Belansai, a friend of his, John goes through with announcing Belansai's hanging as he had no other option. Later that night, Selima tries to break Belansai out, not knowing John is already there. When she walks over to the jail cell, she sees John breaking Belansai out and handing him a gun. As Belansai escapes, John asks Selima to meet him at the dock so they can escape on the boat. Selima tells him he won't come as they'll catch him. John turns to Selima and says "Then I'll tell them I'd rather have you than a country... or a language... or a history". They embrace as the rain is pouring behind them.
The next day, Cecilia announces she's pregnant, shocking John. Although he still has plans to be with Selima and their son, he writes a note but stops as Cecilia catches him. The couple then talk about John's love for Selima and how Cecilia wants John to be happy. Aggie is not happy that Cecilia and Henry have allowed both John and Selima to run away together due to that fact that she never left Henry's sight, fearing he'd go with his sleeping dictionary. John searches for Selima as she's left believing that John didn't come to the place of arrangement. They reunite as Neville comes through with a gun. He tells them to cuff themselves around the bamboos and tells them of his plans to kill John, Selima and their baby. They're then rescued by the Ibans, who kill Neville.
At the end, they decide to live together and migrate with the Ibans.
© Text and image: Wikipedia
Enviar por correo electrónicoEscribe un blogCompartir con TwitterCompartir con FacebookCompartir en Pinterest
Etiquetas: Films, Malaysia, TV & Cinema