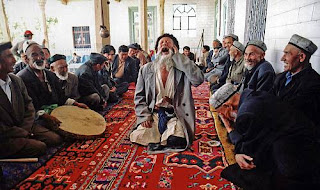 Found among the Uygur people concentrated largely in ’s Xinjiang Uygur Autonomous Region, Meshrep constitutes the most important cultural carrier of Uygur traditions. A complete Meshrep event includes a rich collection of traditions and performance arts, such as music, dance, drama, folk arts, acrobatics, oral literature, foodways and games. Uygur muqam is the most comprehensive art form included in the event, integrating song, dance and entertainment. Meshrep functions both as a ‘court’, where the host mediates conflicts and ensures the preservation of moral standards, and as a ‘classroom’, where people can learn about their traditional customs. Meshrep is mainly transmitted and inherited by hosts who understand its customs and cultural connotations, by the virtuoso performers who participate, and by all the Uygur people who attend. However, there are numerous factors endangering its viability, such as social changes resulting from urbanization and industrialization, the influence of national and foreign cultures, and the migration of young Uygur to cities for work. Frequency of occurrence and the number of participants are progressively diminishing, while the number of transmitters who understand the traditional rules and rich content of the event has sharply decreased from hundreds to tens.
Inscribed in 2010 on the List of Intangible Cultural Heritage in Need of Urgent Safeguarding
© Text and Image: UNESCO
Enviar por correo electrónicoEscribe un blogCompartir con TwitterCompartir con FacebookCompartir en Pinterest
Etiquetas: Asia, China, Cultural Heritage, English