Chez Pascal: A Frenchman's Home is his Gallery 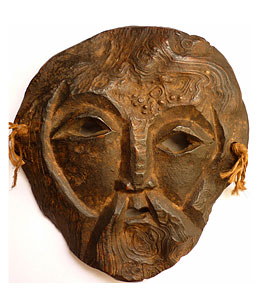 COLLECTORS - PASCAL BUTEL, Asian Art
From Time.com article by John Krich, 24 March 2011
Chez Pascal: A Frenchman's Home is his Gallery
"As implausible as it sounds, one of 's most stunning private collections of antiques is located on a cul-de-sac approachable through the city's most notorious stretch of girlie bars. And this establishment comes with the most personal of services: a guided tour from Pascal Butel, a transplanted Frenchman who is one of 's least known yet most devoted collectors.
He was practically born to the life. When he was 7, his grandmother in Nice chose to bestow on him, from her brassiere, the keys to trunks of treasures foraged from by her father. As a young man on a whimsical urge, Butel made Thai his college major in and afterward headed east.
These days, he lives in a house full of exceptional finds. While his bedroom is off-limits, the rest of the place is packed with astounding objects: a Himalayan shaman's pouch made from a bear paw, a rare Isfahan carpet, intricately carved Nepalese looms, striking totems from Nagaland, Javanese chests. Butel waxes poetic about each object, discussing its provenance and uses daily or divine. The trove, apparently, is a fraction of Butel's main collection, kept in .
More than merely collecting, Butel sees himself as helping preserve traditional "communities of interest and belief" and celebrating a time when "the hand that shaped was directly connected to the heart." Despite being able to lecture like a professor about all he's gathered, he also knows his own limitations. "Just as a grandmother never tells you everything about her life," he says, "the best part of these objects is their mystery."
Casual tourists are not welcome, but Butel will open his doors to those who genuinely share his passion. For an appointment call (66) 8094 40208."
You can email him as well at pbsthai@hotmail.com.
Pascal Butel's tribal and traditional arts of are only a portion of his collections, which also focus on antique objects, furniture and high end statuary.
Enviar por correo electrónicoEscribe un blogCompartir con TwitterCompartir con FacebookCompartir en Pinterest
Etiquetas: Asia, English, Indonesia, Nepal, Thailand