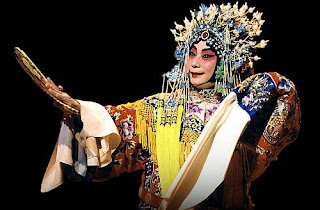 opera is a performance art incorporating singing, reciting, acting, martial arts. Although widely practised throughout , its performance centres on , and . Peking opera is sung and recited using primarily dialect, and its librettos are composed according to a strict set of rules that prize form and rhyme. They tell stories of history, politics, society and daily life and aspire to inform as they entertain. The music of opera plays a key role in setting the pace of the show, creating a particular atmosphere, shaping the characters, and guiding the progress of the stories. ‘Civilian plays’ emphasize string and wind instruments such as the thin, high-pitched jinghu and the flute dizi, while ‘military plays’ feature percussion instruments like the bangu or daluo. Performance is characterized by a formulaic and symbolic style with actors and actresses following established choreography for movements of hands, eyes, torsos, and feet. Traditionally, stage settings and props are kept to a minimum. Costumes are flamboyant and the exaggerated facial make-up uses concise symbols, colours and patterns to portray characters’ personalities and social identities. opera is transmitted largely through master-student training with trainees learning basic skills through oral instruction, observation and imitation. It is regarded as an expression of the aesthetic ideal of opera in traditional Chinese society and remains a widely recognized element of the country’s cultural heritage.
Inscribed in 2010 on the Representative List of the Intangible Cultural Heritage of Humanity
© Text: UNESCO, Image: Zhao Yiping
Enviar por correo electrónicoEscribe un blogCompartir con TwitterCompartir con FacebookCompartir en Pinterest
Etiquetas: Asia, China, Cultural Heritage, English