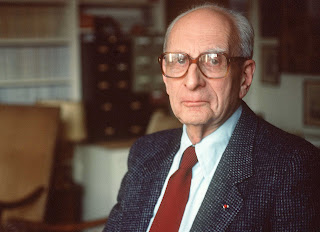 ANTHROPOLOGISTS OF THE WORLD
Claude Lévi-Strauss (1908 - 2009)
Claude Lévi-Strauss (28 November 1908 – 30 October 2009) was a French anthropologist and ethnologist, and has been called, along with James George Frazer, the "father of modern anthropology".
He argued that the "savage" mind had the same structures as the "civilized" mind and that human characteristics are the same everywhere. These observations culminated in his famous book Tristes Tropiques, which positioned him as one of the central figures in the structuralist school of thought, where his ideas reached into fields including the humanities, sociology and philosophy. Structuralism has been defined as "the search for the underlying patterns of thought in all forms of human activity."
He was honored by universities throughout the world and held the chair of Social Anthropology at the Collège de France (1959–1982); he was elected a member of the Académie Française in 1973.
Claude Lévi-Strauss was born to French parents who were living in at the time, and grew up in . At the Sorbonne in , Lévi-Strauss studied law and philosophy. In 1935, after a few years of secondary-school teaching, he took up a last-minute offer to be part of a French cultural mission to Brazil in which he would serve as a visiting professor of sociology at the University of São Paulo while his wife, Dina, served as a visiting professor of ethnology.
The couple lived and did their anthropological work in from 1935 to 1939. During this time Claude undertook his only ethnographic fieldwork. He accompanied Dina, a trained ethnographer in her own right to a conducted research foray into the Mato Grosso and the Amazon Rainforest. They first studied the Guaycuru and Bororo Indian tribes, staying among them for a couple of days. In 1938 they returned for a second, more than half-year-long expedition to study the Nambikwara and Tupi-Kawahib societies. At this time his wife suffered an injury that prevented her from completing the study, which he concluded. This experience cemented Lévi-Strauss's professional identity as an anthropologist.
He returned to in 1939 but had to escape from the government to , from where he was finally able to travel on. In 1941, he was offered a position at the for Social Research in , and granted admission to the . Along with Jacques Maritain, Henri Focillon, and Roman Jakobson, he was a founding member of the École Libre des Hautes Études, a sort of university-in-exile for French academics. Lévi-Strauss returned to in 1948. At this time he received his doctorate from the Sorbonne by submitting, in the French tradition, both a "major" and a "minor" thesis. These were The Family and Social Life of the Nambikwara Indians and The Elementary Structures of Kinship.
His works
The Elementary Structures of Kinship was published the next year and quickly came to be regarded as one of the most important anthropological works on kinship. Lévi-Strauss argued that kinship was based on the alliance between two families that formed when women from one group married men from another.
Throughout the late 1940s and early 1950s, Lévi-Strauss continued to publish and experienced considerable professional success. On his return to , he became involved with the administration of the CNRS and the Musée de l'Homme before finally becoming professor (directeur d'études) of the fifth section of the École Pratique des Hautes Études

While Lévi-Strauss was well known in academic circles, in 1955 he became one of 's best known intellectuals by publishing Tristes Tropiques (1955). Essentially, this book was a memoir detailing his time as a French expatriate throughout the 1930s, and his travels. Lévi-Strauss combined exquisitely beautiful prose, dazzling philosophical meditation, and ethnographic analysis of the Amazonian peoples to produce a masterpiece.
Lévi-Strauss was named to a chair in Social Anthropology at the Collège de France in 1959. At roughly the same time he published Structural Anthropology, a collection of his essays which provided both examples and programmatic statements about structuralism. At the same time as he was laying the groundwork for an intellectual program, he began a series of institutions to establish anthropology as a discipline in , including the Laboratory for Social Anthropology where new students could be trained, and a new journal, l'Homme, for publishing the results of their research.
In 1962, Lévi-Strauss published what is for many people his most important work, La Pensée Sauvage (The Savage Mind). The book concerns primitive thought, forms of thought all humans use. The first half of the book lays out Lévi-Strauss's theory of culture and mind, while the second half expands this account into a theory of history and social change. This latter part of the book engaged Lévi-Strauss in a heated debate with Jean-Paul Sartre over the nature of human freedom. On the one hand, Sartre's existentialist philosophy committed him to a position that human beings fundamentally were free to act as they pleased. On the other hand, Sartre also was a leftist who was committed to ideas such as that individuals were constrained by the ideologies imposed on them by the powerful. Lévi-Strauss presented his structuralist notion of agency in opposition to Sartre.
Now a worldwide celebrity, Lévi-Strauss spent the second half of the 1960s working on his master project, a four-volume study called Mythologiques. In it, he followed a single myth from the tip of South America and all of its variations from group to group up through Central America and eventually into the Arctic Circle, thus tracing the myth's cultural evolution from one end of the Western hemisphere to the other. He accomplished this in a typically structuralist way, examining the underlying structure of relationships among the elements of the story rather than by focusing on the content of the story itself. While Pensée Sauvage was a statement of Lévi-Strauss's big-picture theory, Mythologiques was an extended, four-volume example of analysis. Richly detailed and extremely long, it is less widely read than the much shorter and more accessible Pensée Sauvage, despite its position as Lévi-Strauss's masterwork.
Lévi-Strauss completed the final volume of Mythologiques in 1971. On 14 May 1973 he was elected to the Académie Française, 's highest honour for an intellectual. He was a member of other notable academies worldwide, including the of Arts and Letters. He received the Erasmus Prize in 1973, the Meister-Eckhart-Prize for philosophy in 2003, and several honorary doctorates from universities such as , Harvard, and . He also was the recipient of the Grand-croix de la Légion d'honneur, was a Commandeur de l'ordre national du Mérite, and Commandeur des Arts et des Lettres. After his retirement, he continued to publish occasional meditations on art, music, and poetry.
He died on 30 October 2009, a few weeks before his 101st birthday.
© Text and photo: Wikipedia
Enviar por correo electrónicoEscribe un blogCompartir con TwitterCompartir con FacebookCompartir en Pinterest
Etiquetas: Anthropologists, Brazil, English, South America