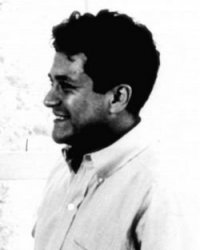 ANTHROPOLOGISTS OF THE WORLD

Carlos Castaneda (1925 - 1998)
Carlos (César Salvador Arana) Castaneda (anglicized from Castañeda; 25 December 1925 – 27 April 1998) was a Peruvian-born American anthropologist and author.
Starting with The Teachings of Don Juan in 1968, Castaneda wrote a series of books that describe his training in sorcery. The books, narrated in the first person, relate his experiences under the tutelage of a Yaqui "Man of Knowledge" named don Juan Matus. His 12 books have sold more than 8 million copies in 17 languages. Critics have suggested that they are works of fiction; supporters claim the books are either true or at least valuable works of philosophy and descriptions of practices which enable an increased awareness.
Castaneda withdrew from public view in 1973 to work further on his inner development, living in a large house with three women ("Fellow Travellers of Awareness") who were ready to cut their ties to family and changed their names. He founded Cleargreen, an organization that promoted tensegrity, purportedly a traditional Toltec regimen of spiritually powerful exercises.

His works
Castaneda's first three books — The Teachings of Don Juan: A Yaqui Way of Knowledge; A Separate Reality; and Journey to Ixtlan — were written while Castaneda was an anthropology student at the of , (UCLA). He wrote these books as his research log describing his apprenticeship with a traditional "Man of Knowledge" identified as don Juan Matus, a Yaqui Indian from northern . Castaneda was awarded his bachelor's and doctoral degrees based on the work described in these books. He also says the sorcerer bequeathed him the position of nagual, or leader of a party of seers. He also used the term nagual to signify that part of perception which is in the realm of the unknown yet still reachable by man, implying that, for his party of seers, Don Juan was a connection in some way to that unknown. Castaneda often referred to this unknown realm as nonordinary reality, which indicated that this realm was indeed a reality, but radically different from the ordinary reality experienced by human beings.
The term nagual has been used by anthropologists to mean a shaman or sorcerer who is believed capable of shapeshifting into an animal form, or to metaphorically "shift" into another form through magic rituals, shamanism and experiences with psychoactive drugs (e.g., peyote and jimson weed - Datura stramonium).
In 1974 his fourth book, Tales of Power, was published. This book ended with Castaneda leaping from a cliff into an abyss, and signaled the end of his apprenticeship under the tutelage of Matus. Castaneda continued to be popular with the reading public with subsequent publications.