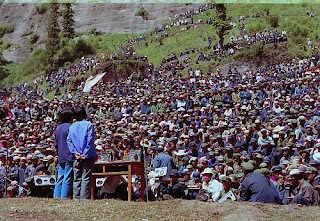 UNESCO CULTURAL HERITAGE
In and and throughout north-central , people of nine different ethnic groups share a music tradition known as Hua’er. The music is drawn from an extensive traditional repertoire named after ethnicities, towns or flowers (‘Tu People’s ling’, ‘White Peony ling’), and lyrics are improvised in keeping with certain rules – for example, verses have three, four, five or six lines, each made up of seven syllables. Songs may tell of young love, the hard work and weariness of the farming life, the foibles of men and women or the joy of singing. The songs are also a vivid oral record of recent social developments in as singers comment on the changes they observe around them. Hua’er singers may have little schooling, but the most successful and widely respected singers today have become household names, performing widely and even creating their own institutes to pass on their art to apprentices. Whether it is being sung spontaneously by rural people working in the field or travelling or performed more formally at one of more than a hundred traditional Hua’er festivals held annually in these provinces, Hua’er is an important vehicle for expressing personal feelings in a social setting and cultural exchange across ethnicities, as well as a popular rural entertainment.
Inscribed in 2009 on the Representative List of the Intangible Cultural Heritage of Humanity
© Text: UNESCO, Image: Linxia prefecture
Enviar por correo electrónicoEscribe un blogCompartir con TwitterCompartir con FacebookCompartir en Pinterest
Etiquetas: Asia, China, Cultural Heritage, Tribes