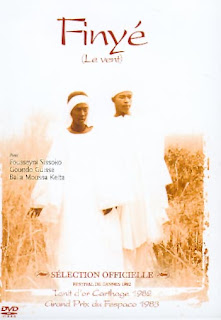 Title: Finyé (The Wind)
Director: Souleymane Cissé
Writer: Souleymane Cissé
Year: 1982
Running time: 100 minutes
Country:
Plot summary:
The film tells the story of a love affair between two teenage students, the daughter of an Army commander and the grandson of a village elder. This narrative at once picks up on the central issues of life in Mali and many other African countries – questions about the effectiveness of administration and lack of democracy in states run by military regimes and also the clash between ideas of ‘modernity’ and ‘tradition’.
The film also marks a shift taking place between ‘social realism’ – recognisable from its European roots – and a more ‘metaphysical’ cinema, alert to the ideas and images of African culture. So, while the military authorities are rounding up students in scenes familiar from European or American films, the hero’s grandfather is communicating with the spirits in the trees.
© Text: http://itpworld.wordpress.com/2003/02/02/finye-the-wind-mali-1982/
Enviar por correo electrónicoEscribe un blogCompartir con TwitterCompartir con FacebookCompartir en Pinterest
Etiquetas: Africa, Films, Mali, TV & Cinema