The Wodaabe of the Sahel 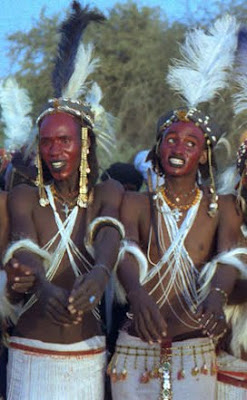 Name: Wodaabe (or Bororo)
Living Area: , , and ()
Population: 45.000 (1983)
Language: Fula
Comments:
In the Fula language, woɗa means "taboo", and Woɗaaɓe means "people of the taboo". This is sometimes translated as "those who respect taboos", a reference to the Wodaabe isolation from broader Fulbe culture, and their contention that they retain "older" traditions than their Fulbe neighbors. In contrast, other Fulbe as well as other ethnic groups sometimes refer to the Wodaabe as "Bororo", a sometimes pejorative name, translated into English as "Cattle Fulani", and meaning "those who dwell in cattle camps". By the 17th century, the Fula people across were among the first ethnic groups to embrace Islam, were often leaders of those forces which spread Islam, and have been traditionally proud of the urban, literate, and pious life with which this has been related. Both Wodaabe and other Fulbe see in the Wodaabe the echos of an earlier pastoralist way of life, of which the Wodaabe are proud and of which urban Fulbe are sometimes critical.
The Wodaabe keep herds of long-horned Zebu cattle. The dry season extends from October to May. Their annual travel during the wet season follows the rain from the south to the north. Groups of several dozen relatives, typically several brothers with their wives, children and elders, travel on foot, donkey or camel, and stay at each grazing spot for a couple of days. A large wooden bed is the most important possession of each family; when camping it is surrounded by some screens. The women also carry calabashes as a status symbol. These calabashes are passed down through the generations, and often provoke rivalry between women. The Wodaabe mostly live on milk and ground millet, as well as yogurt, sweet tea and occasionally the meat of a goat or sheep. This is a rarity for them as they don't often have enough animals to spare for meat.
Wodaabe religion is largely but loosely Islamic. Although there are varying degrees of orthodoxy exhibited, most adhere to at least some of the basic requirements of the religion. Islam became a religion of importance among Wodaabe peoples during the 16th century when the scholar al-Maghili preached the teachings of Muhammad to the elite of northern Nigeria. Al-Maghili was responsible for converting the ruling classes among Hausa, Fulani, and Tuareg peoples in the region.
The code of behavior of the Wodaabe emphasizes reserve and modesty (semteende), patience and fortitude (munyal), care and forethought (hakkilo), and loyalty (amana). They also place great emphasis on beauty and charm.
Parents are not allowed to talk directly to their two first born children, who will often be cared for by their grandparents. During daylight, husband and wife cannot hold hands or speak in a personal manner with each other.
The Wodaabe are sexually liberal; unmarried girls may have sex whenever and with whomever they wish. The Wodaabe practice polygamy. The first marriage is typically arranged among members of the same lineage by parents when the couple are infants (called koogal); later additional "love marriages" (teegal) are also possible, when a woman leaves her husband and joins another one. A bride stays with her husband until she becomes pregnant after which she returns to her mother's home, where she will remain for the next three to four years. She will deliver the baby at her mother's home and then she becomes a boofeydo which literally means "someone who has committed an error." While she is boofeydo, she is not allowed to have any contact with her husband, and he is not allowed to express any interest in either her or the child. After two to three years, she is permitted to visit her husband, but it is still taboo that she should live with him or bring the child with her; this only becomes permissible when her mother has managed to purchase all the items that are necessary for her home.

Well-known by: the Gerewol and Yaake dances.
At the end of the rainy season in September, Wodaabe clans gather in several traditional locations before the beginning of their dry season transhumance migration. The best known of these is In-Gall's Cure Salée salt market and Tuareg seasonal festival. Here the young Wodaabe men, with elaborate make-up, feathers and other adornments, perform the Yaake: dances and songs to impress marriageable women. The male beauty ideal of the Wodaabe stresses tallness, white eyes and teeth; the men will often roll their eyes and show their teeth to emphasize these characteristics. Wodaabe clans then join for the remainder of the week-long Gerewol: a series of barters over marriage and contests where the young men's beauty and skills are judged by young women.